Who is more of a FUN GUY, top picture or bottom picture?! We recently rode a 1970's tandem bike for 50km down the Gardiner Expressway and Don Valley Parkway in Toronto, on a bike that was brought over from the UK. Despite two flat tires and gear failures, Shelby and I are still together!

Our epic bike ride has been somewhat overshadowed by the amazing Raptors championship! What a time to be alive! I don't know about you, but I am still pumped up from the big win!Fortunately (or maybe unfortunately), I'm not going to be talking about my epic bike ride or the fact that my girlfriend is now a huge basketball fan #WeTheBandwagon, but instead, why the GTA and Greater Golden Horseshoe (GGH) is one of the best places to invest in the world!

The Greater Golden Horseshoe and why it's THE place to invest

Ever heard of the Greater Golden Horseshoe? The Greater Golden Horseshoe has some of the greatest demand for housing for a geographic region in the world, and it will continue to for years to come. Two of the main drivers of real estate demand are job creation, and population growth. Toronto has a strong and diversified economy and people are moving here in droves. Because Toronto is such a power house city, the whole GGH area is benefiting as a result.

According to Stats Canada, for the most recently reported quarter, Canada’s population grew 183,715 people in only three months. We used to grow at a rate of about 250,000 people, for the entire year. We now grow by that amount in less than six months. Our growth rate is more than double almost every G7 country and more than four times greater than France and Germany. Italy and Japan are in decline. A brand new Toronto Housing Market Analysis put out by the Canadian Centre for Economic Analysis highlighted some startling GTA specific numbers.They shared the 2041 population growth projections and estimates which showed that the GTA is expected to grow by 3 million people over the next 20 years which is growth of roughly 43%. All of this is happening while states like Illinois and New York are losing population. That’s right, New York State has been losing population for at least two straight years. The population growth in the GTA is driving the demand for housing. This type of supply and demand push drives up the price of housing, making it a great place to invest. 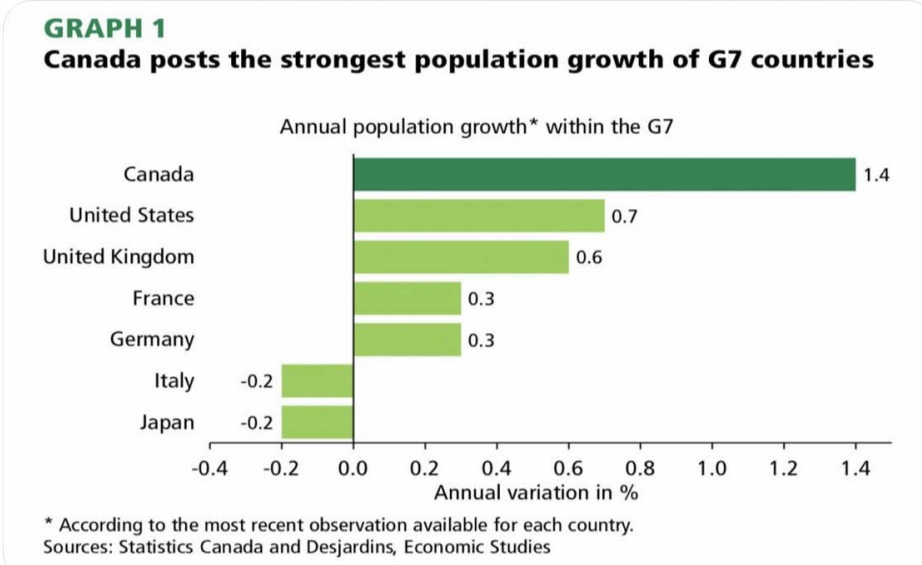 A large portion of the GTA growth is coming from immigration. Immigrants are buying houses which is driving up the demand for housing. In fact, 43% of housing in Toronto is owned by immigrants, and in Vancouver 37% is own by immigrants.

Toronto is a world class city and consistently ranks as one of the best and safest cities to live in. According to the OECD better life index, Canada ranks #1 in Quality of Life for G20 Nations, and Toronto ranked as the #1 safest city in North America and #4 worldwide according to the Economist Safe city index. And we have Drizzy Drake. If you compare the price per square foot of Toronto to other world class cities, Toronto is actually cheap - for now - but maybe not for long! Invest Your RRSP in Real Estate Using this Trick